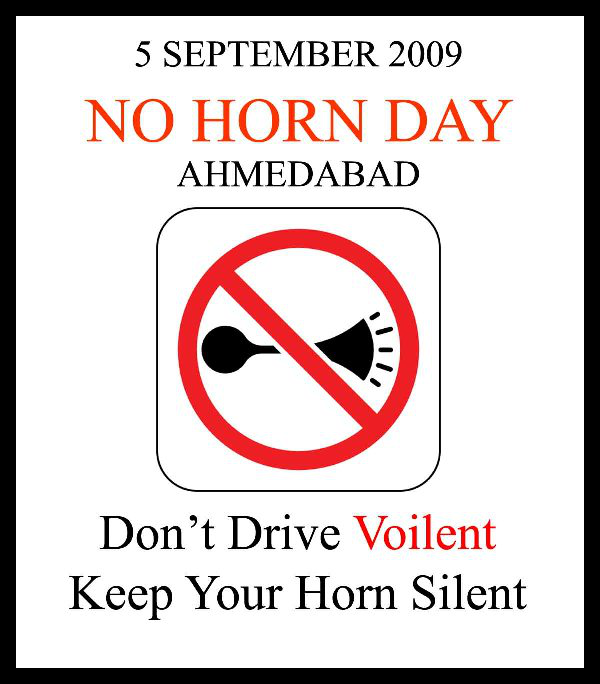 wo international law students Leonie Timmers and Katarzyna Tryzpiola (Kasia) from Holland and Poland respectively came to Paryavaran Mitra for their 3 months internship in Ahmedabad, Gujarat.

Both were very much annoyed by higher noise levels, especially noise of horns in Ahmedabad. And they came up with the idea of having no horn for whole day in Ahmedabad. Several meetings with different groups and people were done for getting support and more suggestions. A survey of 100 people about this noise levels was carry out Leonie and Kasia at two different but very busy and noisy streets of Ahmedabad- at Gurukul road and satellite road. And surprisingly Ahmedabadies replied that they are very much annoyed by horn noise and supported the idea of having No Horn Day.

SCHEDULE OF NO HORN DAY

On 5th September Street play was performed by Bodhan theater 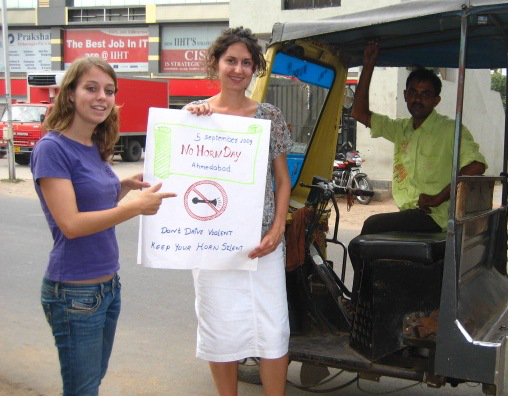 group followed by a silent rally with posters and banners was organized from M.N. Shukla B.Ed college to Thaltej cross roads. All the students of M.N. Shukla B.Ed College prepared banners and slogans saying no horn. Mr. Parimal Trivedi, Vice chancellor of Gujarat University was invited to show flag to this silent rally. A long human chain was built at Thaltej circle with posters and banners. Two wheeler and four wheelers blowing horn were given stickers and wrist bands to inspire them to refrain from unnecessary using horns.
Also it was announced that 5 students for best slogans and 5 for best posters will be awarded with prize while others will also be given token prize which were given to them on 16 September-Ozone day celebration program by Gujarat Pollution Control Board.
R.J. Tibrewal College was also visited after this rally. A small group of students of R.J. Tibrewal college stood at IIM Cross roads for more than one and a half hour with posters of No Horn Day and No Horn Please. Also stickers were given to people blowing horns. Whenever the poster was shown to a person blowing horn they really sense the mistake of blowing unnecessary horn and few people stopped blowing horns.