Public Hearing of Paryavaran Mitra to engage in public consultation with all its stakeholder groups by proactively disclosing its information, with the objective to establish transparency and pronounce itself accountable in the public arena.

We refer to the State and Civil Society as two ends of the spectrum where the state forms the elected representatives of civil services.  Democratic institutions are not complete unless we have the voice of people who have a legitimate space in the relationship between the above two. Therefore any organized form of public representation to either of these constitutes the civil society process or civil society action. NGOs registered under charitable societies or charitable trusts form only one form of public representation. The moment they start accessing public funds they move from the domain of being independent to being directly accountable to the public and not via the state.  The present level of accountabilities such as reports to government and annual reports is not sufficient. Therefore once in 2 or 3 years they need to go to the public for public accountability and therefore the public hearing.

In the latter part of the 80’s, under the aegis of the Planning Commission, there was an attempt to initiate a code of conduct that brings forth issues of governance, transparency and process of accountability, in the voluntary sector.

“Accountability and transparency are key issues in governance, and the voluntary sector is expected to set benchmarks in this regard. Accountability to funding sources, though important, is not enough, and greater emphasis should be placed on social accountability to the stakeholders. Recognizing the diversity of entities comprising the voluntary sector and the undesirability of specifying uniform standards for all, Voluntary organizations shall be encouraged to evolve their own codes of conduct and governance standards. These should be appropriately notified and given publicity by the federating or network organizations along with disclosure and reporting procedures.”

(Extracted from the Draft National Policy on the Volunteer Sector, 2003, Planning Commission, Government of India.)

Over the last 10 years of its existence Paryavaran Mitra has struggled to make the instrument of Environmental Public Hearing (EPH) an effective tool to negotiate, prevent the negative impact of unplanned, short sighted and sometimes unethical practices of industry. In its early years Paryavaran Mitra after attending some 20 EPHs approached the Gujarat High Court and obtained a land mark judgment (in the case of Centre for Social Justice Vs Union of India SCA 8529/1999) that enhanced public participation.

By definition a Public Hearing is a hearing formally announced and convened to afford any person who has an interest in the organization or affected by its actions as an opportunity to be heard. Paryavaran Mitra seeks to use the procedure adopted in an Environmental Public Hearing Since 1997 obtaining an Environmental Clearance has become mandatory for industries before implementing large industrial projects.

Assuming the metaphor of an Environmental Public Hearing, Paryavaran Mitra conducted its own public hearing opening up to its stakeholders on the parameters of transparency and accountability. Following is the case study of this initiative by the organization.

What was the case?

A voluntary sector, which is responsive to the needs of the society, is democratic and transparent in its functioning and accountable to all concerned. It is important to build the credibility of the voluntary sector through creation and promotion of norms of good governance and public disclosure.

Paryavaran Mitra has come to believe that the principle behind the Public Hearing as an accountability mechanism need not necessarily be for industries as mandated but also adopted by institutions that belong to the public space. Therefore in order to highlight its work over the last 10 years and subject itself to accountability Paryavaran Mitra organized a Public Hearing on itself before its stakeholders. In this process it seeked to draw a mandate for the future from its stakeholders.

The strategy had the following components:

The preparation for the event was done on the following aspects:

The quality, quantum, format and method of presenting the information about Paryavaran Mitra would be most decisive in determining if this was a sincere and concerted effort towards public accountability, or another eye-wash. It would also be the most decisive in determining the effectiveness of this event. Therefore collation of comprehensive data/information and their presentation in comprehendible manner was crucial, and a strenuous exercise.

The information was presented in the form of a document which was collation of work done by Paryavaran Mitra over the past 10 years. The document was organized in three parts:

Which individuals would be selected from the stakeholder groups was decided based on certain criteria, such as, what has been the level of engagement with them and what impact their presence will have on this public hearing as well as on such other future events. As very important criteria, the relationship of selected jury members with Paryavaran Mitra was also articulated, in terms of services/ support that the two have exchanged with each other. Individuals to be invited as jury members was first listed who were than selected against the mentioned criteria. The list of jury members who presided over the event is given below: 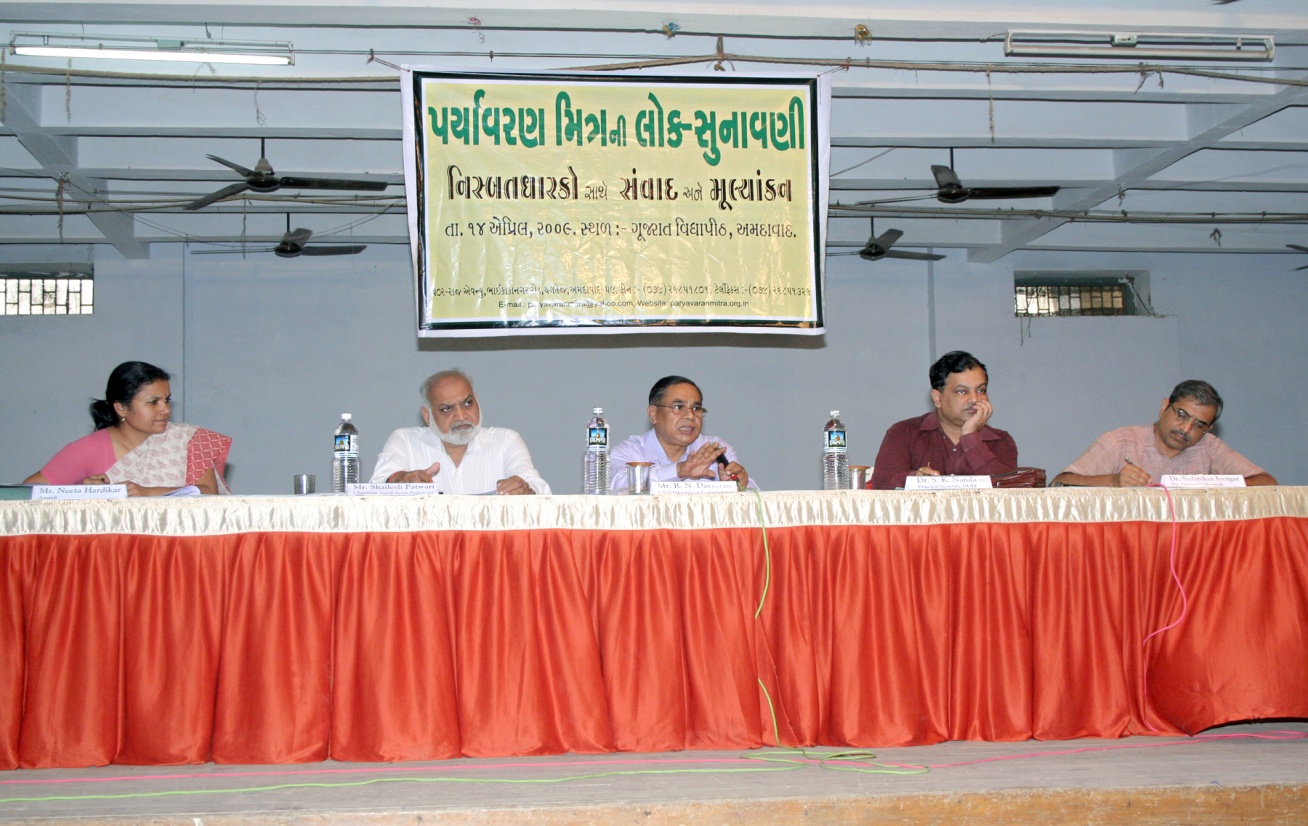 Following is the process of Public Hearing from the preparation to the follow-up stage:

The Public Hearing on Paryavaran Mitra was a half day event from 10 am to 1 pm held on April 14 (Ambedkar Jayanthi). Paryavaran Mitra announced the event in its bi-monthly newsletter and through invitation letters distributed to more than 1500 of its stakeholders.

The process is divided in 3 parts- Before the event, The Event, and After the Event.

Following was the half-day schedule of the Public Hearing.

The main objective of CGS is benchmarking and improving the governance standards in voluntary organizations. Towards this objective it uses various methodologies for awareness, concept building and supporting organizations to better their governance systems.

CGS supported Paryavaran Mitra in this process by helping them identify which information to make public, develop the formats in which to collate the information and analyzing them, and also in designing the event. A representative of CGS was engaged with the team in doing the above.

Drawing from its mandate, CGS intervened in this process with the objective to experiment with public hearing as a tool for enhancing accountability and transparency among voluntary organizations. In its endeavor to address these two very important issues in the arena of governance, CGS worked in this process to look at the effectiveness of this tool as well as the challenges it could possibly bring up.

A note on the role of CGS in this public hearing is annexed. 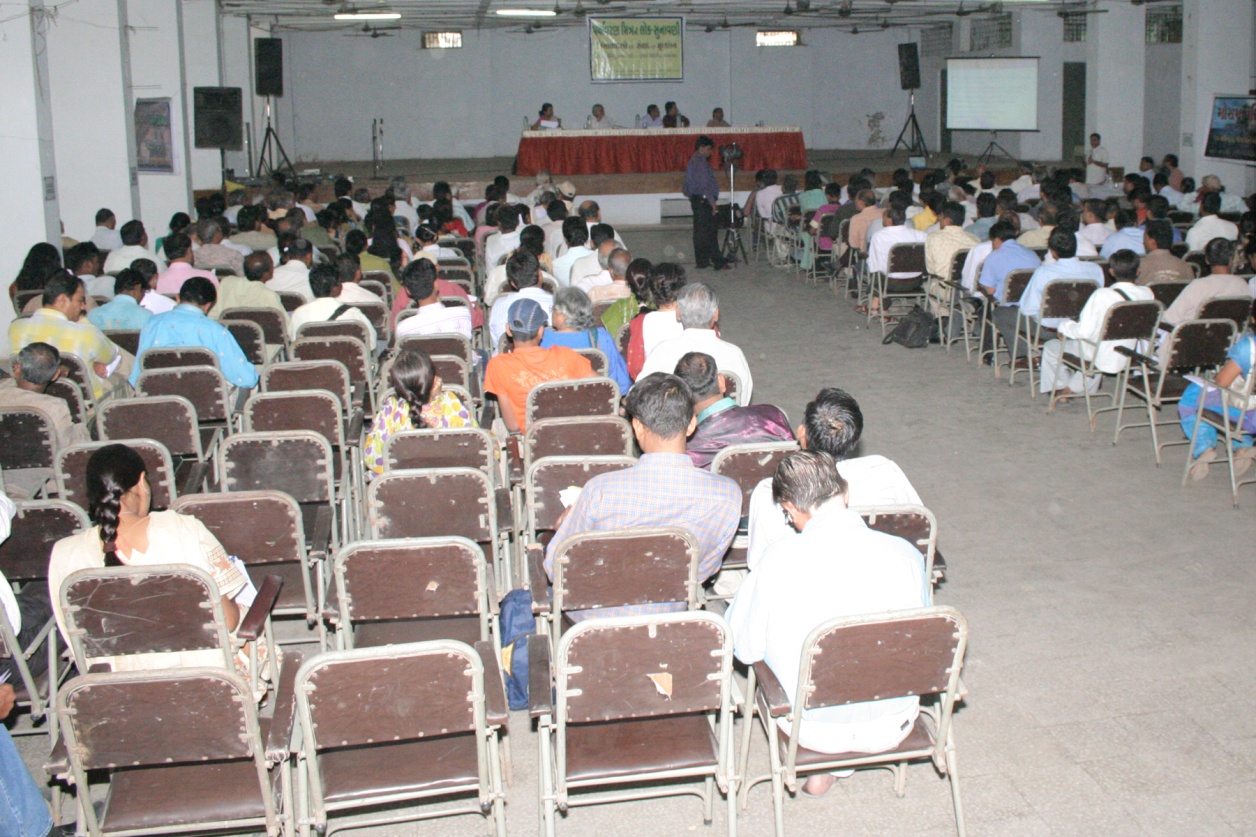 As two of the jury members were government officers, many people used the platform to present their questions and grievances of their individual cases as well as of the cases of public interest.

Most responses and questions that came from the participants were related to specific issues- environment, pollution, queries and responses under Right to Information (RTI) Act, etc. They were not so much addressed to the other accountability aspects of organization.

All three aspects of the organization- Internal systems of the Organization, Details of Programs carried out and Financial Information- were presented with the objective to share complete information and to invite questions and critique from the participants and jury members. Though the interaction with the participants was not much in line with the agenda of participation, many people did take this opportunity to present their issues.

This can probably be attributed to the fact that this type of public consultation is not a practice and therefore the stakeholder groups are not in the habit of questioning the accountability and transparency issues of organizations.

We are all well aware that the talks regarding financial sources of voluntary organizations, their physical resources and assets, background of people and their credibility, do the rounds in informal settings, and many times as grapevine too. Common people, including the specific groups or communities with whom the voluntary organizations work, do not raise such questions in formal settings; or rather there are not many formal forums where they can ask questions regarding finances, assets and staff of organizations. Hence it will need constant efforts on the part of voluntary organizations by organizing such open and formal forums and proactively disclosing their information in all areas. It is only than that people and other stakeholder groups will get accustomed to raising the assumingly ‘discomforting’ questions to the organizations. The principles of transparency and accountability will not be translated into reality until such events are repeated at regular intervals and until it becomes customary for stakeholders to actively question and critique voluntary organizations.

Questions that were not addressed within the time limit were recorded, answered and uploaded onto Paryavaran Mitra’s website soon after the event or posted to the stakeholder. The entire process has been documented in the organization.

There were important results of the exercise of information collation in the areas in which it was presented. For the first time the team quantified its work in four focus areas (For e.g.,  how much worth of land a certain intervention prevented from being acquired, or how many families could be saved from being displaced?). This quantification, though not possible in all interventions, helped to lend a more tangible and precise shape to the impact these interventions have had on the communities for whom they were meant.

Similarly, putting together the financial information of ten years was a challenging task. Before Paryavaran Mitra became autonomous, finances in the initial years were merged with Center for Social Justice (CSJ). Therefore segregating them to chart out the budget allocations and expenses of Paryavaran Mitra was difficult work. But once done, it gave complete financial data of the organization.

This process also threw up a few areas to be worked on in future for the team of Paryavaran Mitra.