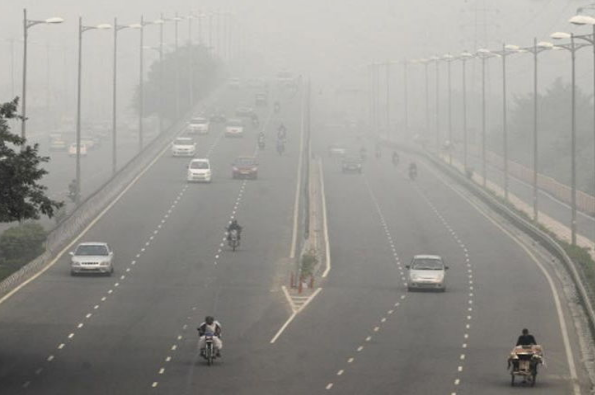 By Our Representative
Gujarat’s premier environmental non-profit organization, Paryavaran Mitra, has asked chief minister Vijay Rupani to immediately set up an expert-level committee to find out the exact reasons for sharp rise in pollution in Ahmedabad. This committee, says a letter by the organization’s director Mahesh Pandya, must focus on each of the city’s regions as a unit, even as taking the opinion of the people.
The letter follows reports regarding sudden rise in air pollution in the city following the Diwali festival. Even as praising the Ahmedabad Municipal Corporation for “successfully monitoring” pollution in the city by putting up bill boards warning citizens about it, the letter says that the online monitoring station in Maninagar area has revealed an “extremely dangerous situation as a result of fire crackers during Diwali.”
On non-Diwali days, things were found to be no better. Thus, the pollution levels reach very high – higher than the average of the year, which is AQI of 70, on November 13, for instance. Between 7:30pm and 9:30pm on that day, one of the city’s most cosmopolitan and expensive residential areas – Bopal – reportedly recorded the worst air quality on November 13.
At 307, the air quality was deemed ‘very poor’ by the Centre’s SAFAR (System of Air Quality and Weather Forecasting And Research). Bopal’s reading was worse than that of Pirana, the city’s mammoth smouldering landfill site recorded the Air Quality Index (AQI) of 306 in the same period. The Satellite area registered an AQI of 236, which was marked ‘poor’ by SAFAR.

On an average, against Delhi’s average annual PM2.5 concentration of 101 micrograms per cubic metres (g/m3) of air, Ahmedabad had a concentration of 70, which was higher than Mumbai’s 60 and Pune’s 47 for the year 2017, said a findings a paper ‘On processes controlling fine particulate matters in four Indian mega cities’ by Vrinda Anand, Nikhil Korhale, Aditi Rathod and Gufran Beig, published in ‘Environmental Pollution’ recently.
The letter, sent to Rupani on November 20, says that a report prepared by the proposed experts committee on pollution should be made public, adding, “Similar experts committees should also be set up in other cities as well. This would help bring about a solution to the long-standing pollution problem in Gujarat for the short and long term.”
According to the Air Pollution Knowledge Assessments (APnA) programme, Ahmedabad power plant emissions are responsible for 39% of particulate matter pollution, followed by road dust (22%). In November, when meteorological phenomena like inversion take place, industry emissions constitute 15% of pollution, vehicle exhaust contributes to 16%, waste burning make up 9%, and dust accounts for 19%.
Did you find apk for android? You can find new Free Android Games and apps.
Share 0
Tweet
Share 0
Share
Share