The Sustainable Development Goals (SDGs) have been adopted by the development community and 193 member states of the United Nations as the development agenda from 2015 to 2030. The SDGs address the social, economic and environmental aspects of sustainable development including peace, justice and strong institutions. The SDG agenda is ambitious and translating the goals into action at the country level implies that national governments take immediate steps to formulate country specific targets, sets of indicators and action plans. Government of India has moved ahead on the nationalising of the implementation of the SDGs and initiated preparation of the Vision Document 2030: NITI Aayog has been assigned the role to coordinate efforts on SDGs.

Paryavaran Mitra have been involved towards helping in achieving SDG and our work directly contributes to many of the goals related to environment like water, climate change, livelihood, health etc. Paryavaran Mitra is contributing to intervention at state level for implementation of SDG goals in state of Gujarat.  We have been part of many regional and national level consultations in nationalizing the sustainable development goal which is given below. 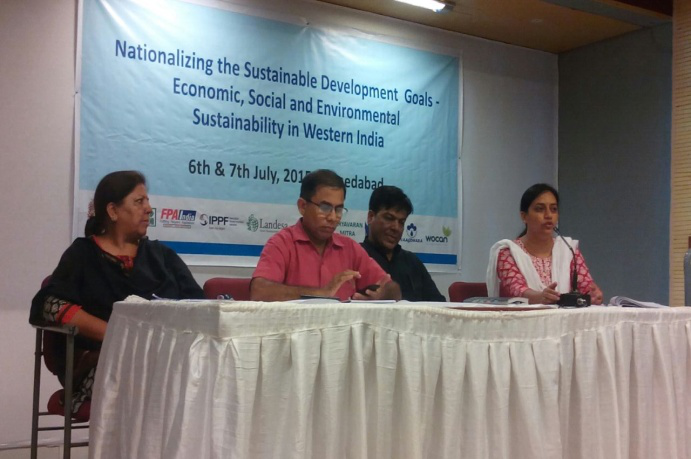 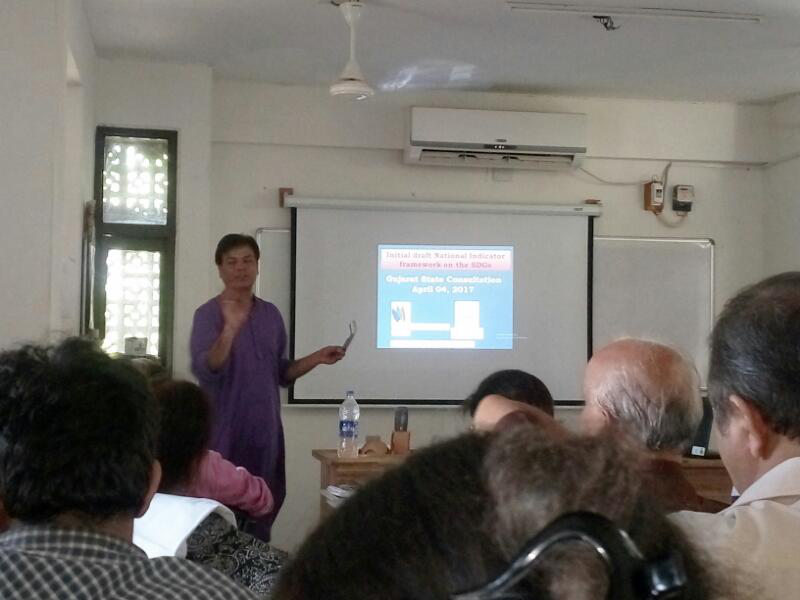 Mahesh Pandya, Paryavaran Mitra was expert speaker at a panel discussion to deliver opening statement on environmental issues and access to justice on 13 March 2016 as part of a conference on SDG 16 in Ahmedabad which was jointly organized by Centre for Social Justice and Wada Na To Do Abhiyan.  The conference which primarily aimed at human rights activists was intended to be a platform for learning and sharing of experiences, initiatives and best practices arising out of engagement with various dimensions of SDG 16. The conference was designed to be a combination of inputs from experts and participation from field activists.

Mahesh Pandya was speaker at ‘the Budget Analysis Workshop on SDGs’ on 27 Nov 2016 for sharing his thoughts and insights on different aspects of implementation process of Sustainable Development Goals in India. His session was on “Advocating for Goal 13: Exploring Avenues for Environmental Protect.” There were civil society participants who had arrived from over 9 states to attend this workshop.

Mr Mahesh Pandya participated at National Pre COP Consultation on 22nd October 2015 organized by PAIRVI, CECOEDECON, and Beyond Copenhagen in collaboration with Oxfam India.  Leading civil society organisations working on climate change and sustainable development concerns, media, policymakers and representatives from important actors/countries through their missions in Delhi participated in the Consultation. The Consultation discussed important concerns and challenges before the Marrakech COP and what to expect from this COP.

A State-Level consultation was organized by Paryavaran Mitra and other NGOs on 4th April, 2017 at Ahmedabad in which around 35 participants from various sectors of civil society organization from all over Gujarat participated. Based on the outcome of the consultation, we sent comments and suggestions on initial draft National indicator framework for sustainable development goals. Ministry of Statistics and Programme Implementation (MoSPI) had prepared initial draft national Indicator framework for monitoring of nationally defined Sustainable Development Goals. The consultation was aimed with particular focus on the present scenario of SDG in various states of India, discussion about the draft national indicators, and come up with the way forward to develop indicators that can be suggested for various goals.

In a follow up to the State-Level consultation on “Initial Draft National Indicators framework on the SDGs” that was organized on 4th April, 2017 in Ahmedabad, the “Consultation on the National Indicators for the SDGs Implementation” was organised by Beyond Copenhagen, SADED, BCPH), DST, Pune, CECOEDECONBJVJ, & PAIRVI at Delhi on 6th April, 2017. The seminar was held after the state consultations in various states and Mr. Mahesh Pandya from Paryavaran Mitra represented it from Gujarat. We also submitted comments and stated suggestions on initial draft national Indicators Framework on Goal 6.